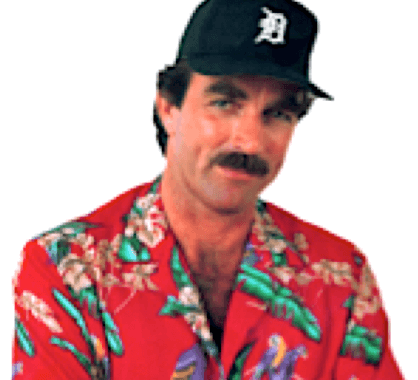 i’move continues to celebrate men’s health month by getting advice from guys with great moustaches. Entry number two in this series is perhaps the most famous tv moustache of all time: Tom Selleck.

In a 2014 interview with GQ Magazine, Tom Selleck complained that his body would let him down at times when he had to do his own stunts on the set. Typically, he would spend a lot of time sitting around between takes and then would have to immediately get up and do something athletic like sliding across the hood of a Ferrari or tackling a bad guy. He realized that not taking the time for a proper warm up was the main cause of his aches and pains.

So here are a few components of a proper warm up that you can use before starting an activity.

I recall going to a Detroit Tigers game several years ago where before the game started, three Tigers were laying by 3rd base on their backs as they waited for the trainer to stretch out their hamstrings. While that may look like the way the 2018 Tigers performed (sorry, Tom), that’s not how baseball should look. Compare that to Curtis Granderson who was the center fielder at that time. His warm up was getting into the position of winding up to throw the ball into the infield and then doing various motions to get the spine and hips moving. Granderson was also a base stealer, and to prepare for this activity he would get into a small crouch, take a couple big steps to his right and then turn his hips and trunk to the right as if he was making a break for 2nd base.

Proper warm up practices deserve some of the credit for Curtis Granderson lasting 14 years in Major League Baseball, allowing him to function at a high level even at “advanced age” of 37.

And at the end of the workout, don’t forget about a cool down, unless you’re Tom Selleck who couldn’t possibly be any cooler.

Flexibility is defined as the ability for a joint (bones, muscles, ligaments and tendons) to…

More than a Resolution: Starting a Fitness Routine

We’re all for fitness at i’move. We work to maintain healthy joints and muscular structures…

FIT Updates: The Latest on Our Adult Fitness Program

We all want things to go back to normal, but it’s good to be back.…

Recent Posts
Social
Follow us for the latest i'move news
Ready to get moving? Contact us today to schedule an appointment.
Contact Us
Back To Top
×Close search
Search